The allied forces wished to end  the Second World War with as few victims as possible. In order to achieve this, the Airborne troops needed to capture and secure the bridges, so that the armies could proceed to Germany through the central Netherlands. In theory it was a sound plan, but carrying it out proved to be very complicated. On September 17th 1944 Operation Market Garden was launched: a joint allied attempt to get control over the Rhine bridge near Arnhem, and so to force a breakthrough into Germany. Eleven thousand troops were dropped on the Ginkel Heath and near Wolfheze.

In Oosterbeek it was a beautiful Sunday morning. As usual there was a church service, led by the Revd J.G.L. Brouwer. The service had only just started when the German anti-aircraft guns on the flood plains of the Rhine river began to fire at the English aircraft passing overhead. It must have been a frightening experience for the people in the church. After the sermon a few hymns were sung, for instance ‘A mighty fortress is our God’. The service closed with the national anthem, which was sung with gusto by all seven hundred people present. After the service they all hurried home, worried about what they would find there, and what would happen next.

In the meantime paratroopers were on their way to the Rhine bridge near Arnhem. Although the Germans had been taken by surprise, they regrouped very quickly and fought back with all their might. During the skirmishes, often one man against another, many young soldiers lost their lives.

Of all the British troops that had landed, the battalion led by lieutenant-colonel John Frost was the only one that managed to get control over the north side of the bridge. They were caught in German crossfire from two sides: from the Germans who controlled the south side of the bridge and from the Germans who, coming  from the north, gradually regained control over Arnhem. Sadly, the allied forces approaching from the south were too late to capture the bridge.

General-major Roy Urquhart had established his headquarters in the Hartenstein Hotel, nowadays the Airborne Museum. That is how Oosterbeek found itself in the heart of the battle. The allied forces suffered many losses and were not able to maintain their position. The Germans kept attacking the perimeter without ceasing, using heavy tanks. The troops around the Old Church especially took the punch. With the assistance of some howitzers, that had been placed around the church, they managed to fend off the attacks. In the end the battle raged for eight days.

Out of the eleven thousand soldiers that had landed, only 2,400 managed to escape by crossing the Rhine. The others were killed or wounded, or taken as prisoner of war. Only a very few were able to go into hiding, staying with Dutch citizens on the Veluwe.

The church was one of the last strongholds of the allied forces, before these had to withdraw to the opposite banks of the Rhine river. On September 19th major Richard Lonsdale, second in command of the 11th Parachute Regiment, addressed his troops:

"You know as well as I do there are a lot of bloody Germans coming at us. Well, all we can do is to stay here and hang on in the hope that somebody catches us up. We must fight for our lives and stick together. We've fought the Germans before - in North Africa, Sicily, Italy. They weren't good enough for us then, and they're bloody well not good enough for us now. They're up against the finest soldiers in the world. An hour from now you will take up defensive positions north of the road outside. Make certain you dig in well and that your weapons and ammo are in good order. We are getting short of ammo, so when you shoot you shoot to kill. Good luck to you all".

On September 21st 950 men, belonging to the Polish Independent Parachute Brigade under the command of general-major Stanislaw Sosabowski, were dropped near Driel, on the south bank of the Rhine river. During the following nights small bands of Polish paratroopers managed to cross the river, despite heavy German fire and a lack of boats. In Oosterbeek they joined the British troops.

In the old vicarage next to the church around 250 wounded soldiers had found shelter. Mrs. Kate ter Horst tried to care for them as best as she could. Her British patients lovingly called her ‘the Angel of Arnhem’.

Operation Market Garden failed miserably, and Oosterbeek and the Old Church were left in ruins. 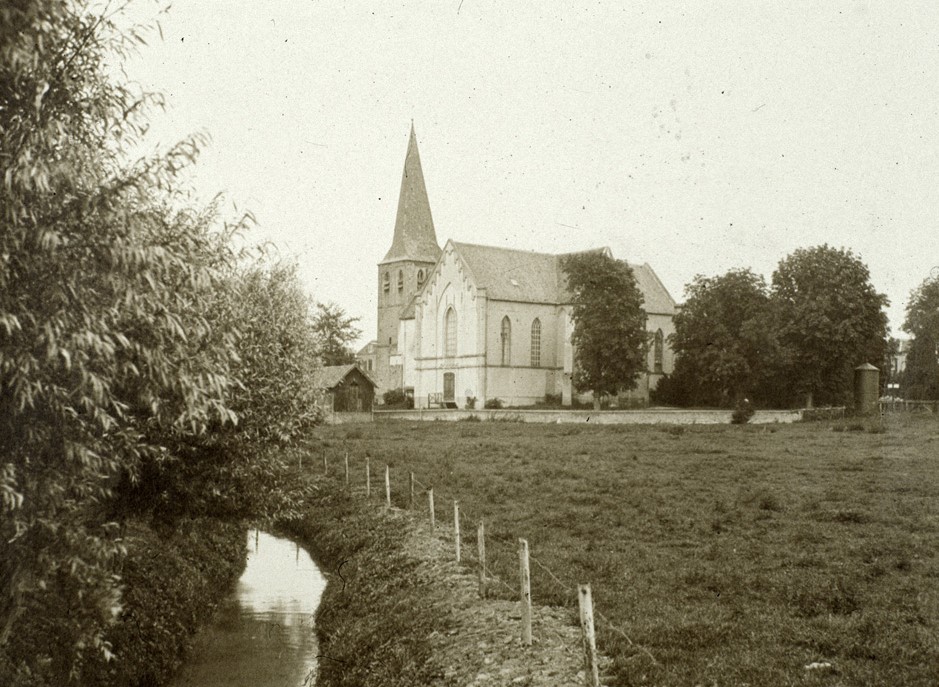 The church before september 1944 and after the battle. 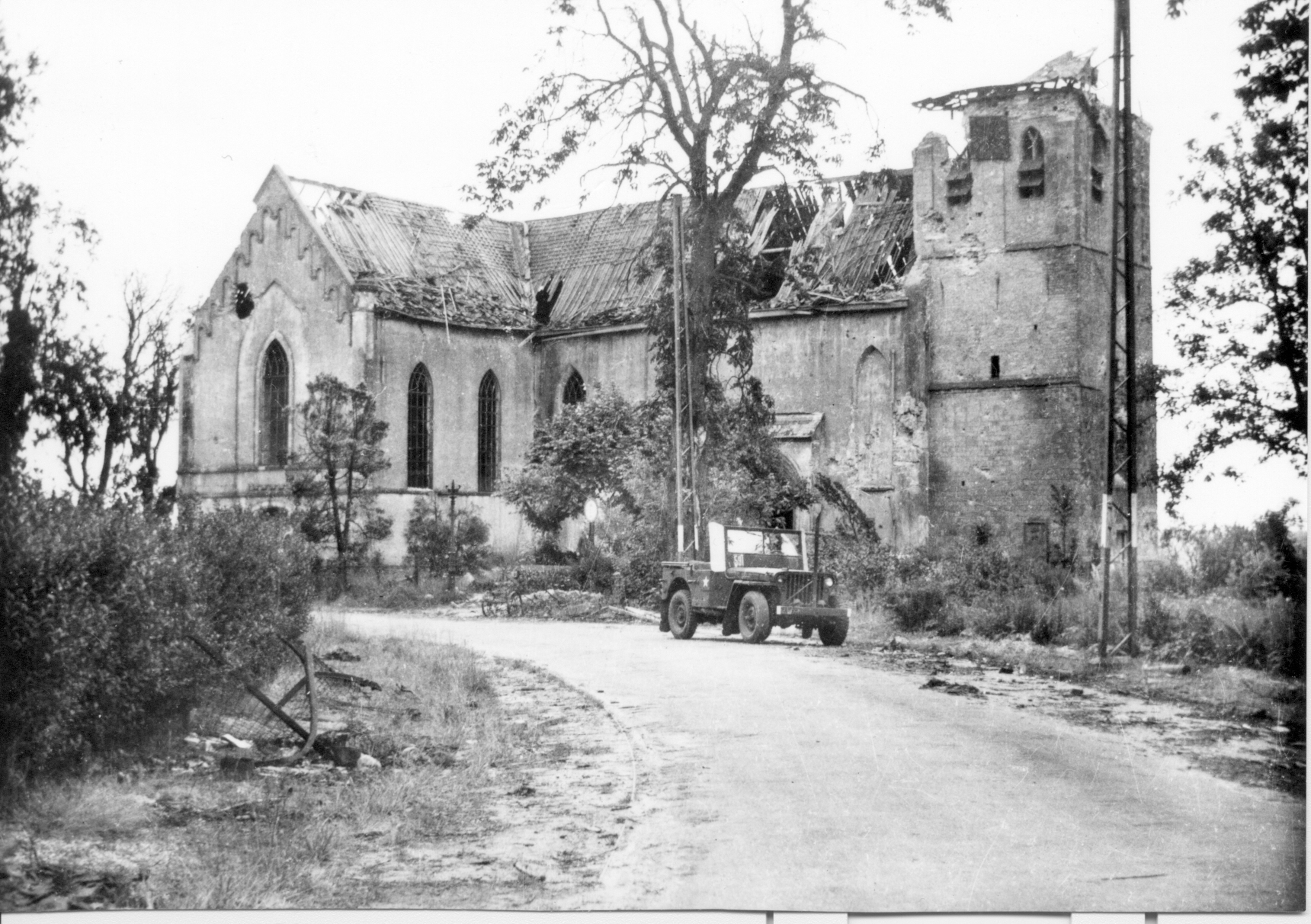 The citizens of Oosterbeek and Arnhem and the surrounding area had to leave the ‘Sperrgebiet’. They were evacuated, taking only what they could carry. In April 1945 the first citizens returned to their heavily damaged and sometimes looted houses.

After the war it was decided to build a new church in the village centre (the Church of the Good Shepherd, since 2009 Funeral Home Mijnhart). This new church was consecrated in 1954. Since then the Dutch Reformed Church in the Lower Village is known as the Old Church. It was decided to rebuild this church in its former Romanesque style. After an extensive restauration the church was fit for use again in 1949. Since then British and Polish war veterans are among its regular visitors.

The Old Church is one of the main venues of the Airborne Commemorations, annually held in September. On the Sunday that marks the end of the commemoration week there are several memorial services in Oosterbeek. 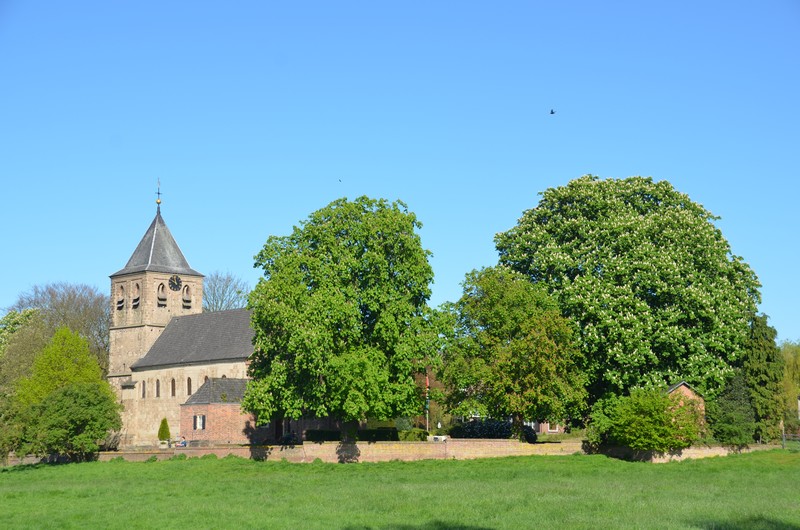